Evolution of the transportation system in Dubai: Road transport 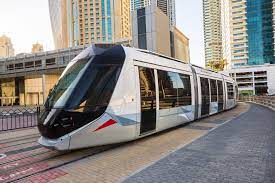 The number of cars in Dubai began to increase in the 1970s. During that time, the roads were even fewer. In fact, you were at danger driving a car then as you are riding a motorcycle without a helmet in a super-highway on the wrong side of the road- very. You could find camels wandering about and they often caused fatal accidents. The only tarmac road had been paid for by Saudi Arabia running from Dubai to Ras Al Khaimah. Tough world eh?

The kinds of cars that you could find were trucks because they are the only ones that could handle the terrain.  Travelers relied on taxis and their drivers who were familiar with the beaches to follow the right tracks and convey them safely to wherever. Woe to you if your car got stuck somewhere along the way!

When trading with Abu Dhabi, Landrover’s were a favorite for traders with that changing way later.

During that period Dubai enjoyed lower tax regulations on goods and even lower requirements compared to the other UAE nations so traders would often smuggle their merchandise at night with their trucks without causing any trouble.

But, in the early 70’s, the period in which all this was happening, the choice vehicle for traders-land Rovers- was in short supply. As you would expect, when everyone is busy bogged down in the details of a calamity, there are usually opportunists who take the calamity and make something good out of it for themselves and there were.

They would steal the vehicles from the Dubai Defence Force and do their business. This, by the way, went on for quite a while without being noticed by authorities.

In 1973, road construction between Abu Dhabi and Dubai was completed with both of those states constructing their part of it and meeting at the border. The two-lane road had zero lighting which meant that there were many accidents.

Later on, the Jebel Port was opened and it saw the trade of goods transported by road facilitated with the already constructed highway being the center of all operations. In the mid-1990’s, the road was widened and flyovers and roundabouts were added. You could now get to Dubai by road in less than 2 hours.

Other roads to connect the Emirates were also constructed then.

Today, the UAE invests millions in maintaining the roads, expanding and upgrading and even building new ones. In 2010, the project to construct the Mafraq-Gweifat highway was started and completed 4 years later.

Authorities sought to solve the problems with black spots and congestion and everything has been looking up since then.

Dubai has traveled a long way (no pun intended) since less than five decades ago. We have not even discussed the milestones in other means of transport such as rail, air, and water (and they are equally as impressive). It is exciting waiting to see where they will be a few more decades to come.

How to ensure that you have top-notch security